All eyes will be on the Highland town of Fort William this weekend – the ‘Outdoor Capital of the UK’ – as Scotland prepares to welcome the world's best downhill riders to the UCI Mountain Bike World Cup. 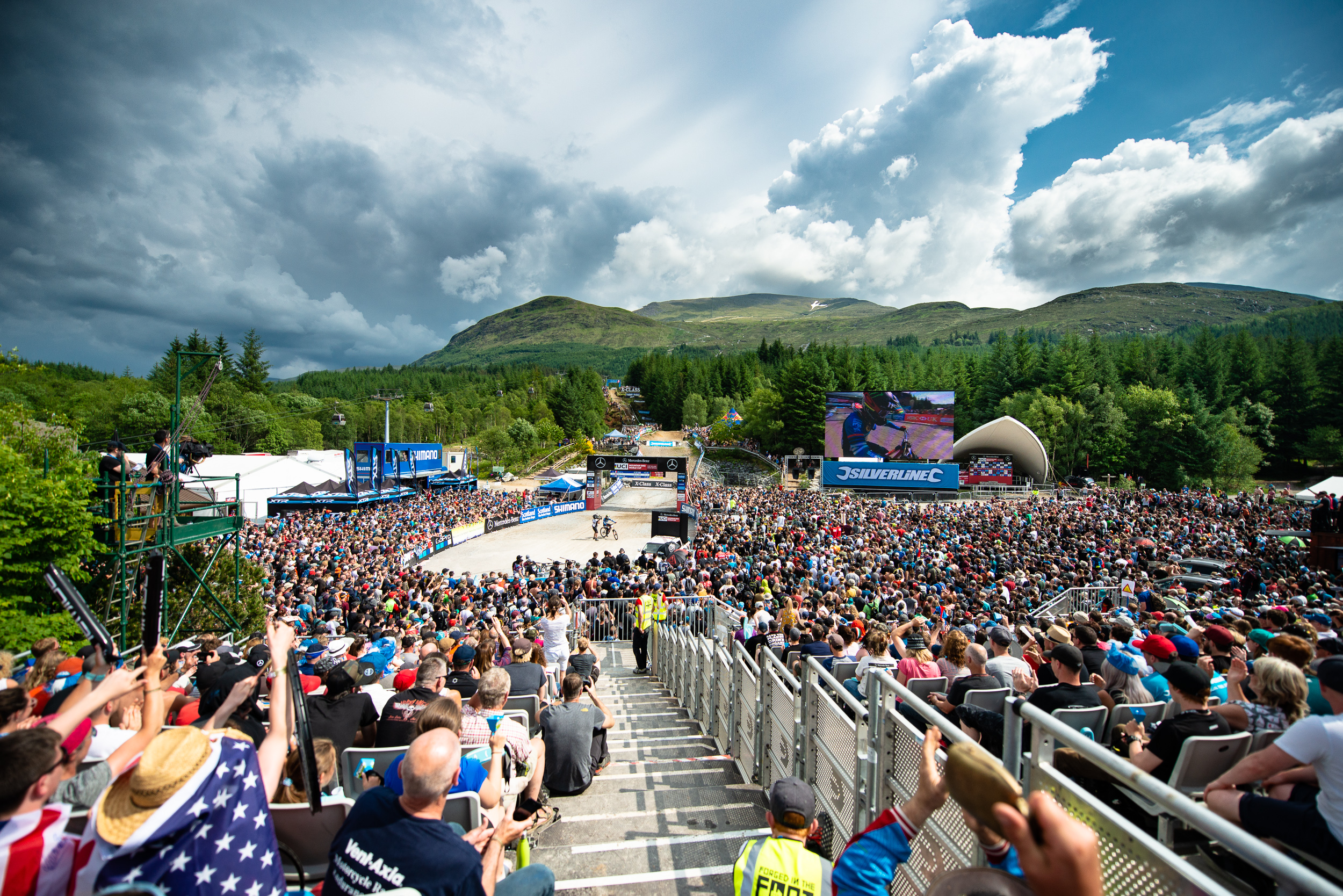 The 2.8km Nevis Range Downhill course is a genuine white-knuckle ride, with riders racing down the slopes of Aonach Mor, the 9th highest mountain in the UK. The longest and most demanding course on the Mountain Bike World Cup circuit, the course has undergone some tweaks ahead of this year’s event. Riders will need physical strength, quick reflexes, superb bike control and an unerring eye for the right line as they speed down the fast and twisting course.

The lightning-fast top section is framed by stunning views of the UK's highest peak, Ben Nevis, the stunning Loch Linnhe and Loch Eil, as well as the islands of the Inner Hebrides. Rock gardens, rock slabs, big jumps and technical natural sections will provide plenty of challenges all the way to the magnificent finish section and the incredible noise of the best spectators in the world.

Starting beside the top station of the gondola, the course descends 555m. Most of the course is visible from the mountain cableway used for skiing in the winter, which provides access for riders with bikes and spectators, giving great views of riders as they charge down below you. Fort William is already a place of pilgrimage for British mountain bikers and spectators are guaranteed to add plenty of colour and noise to this year's event, as thousands of fans crowd the finish area.

Britain is one of the top ranked nations in Downhill, with outstanding performances in the Men’s, Women’s and Junior events. We’ve got multiple World Champions and this year's event could feature a total of eight British World Champions from the past 11 years. But, with more than 250 riders from 25 different nations representing the world’s best downhillers, competition for medals is sure to be incredibly tight. 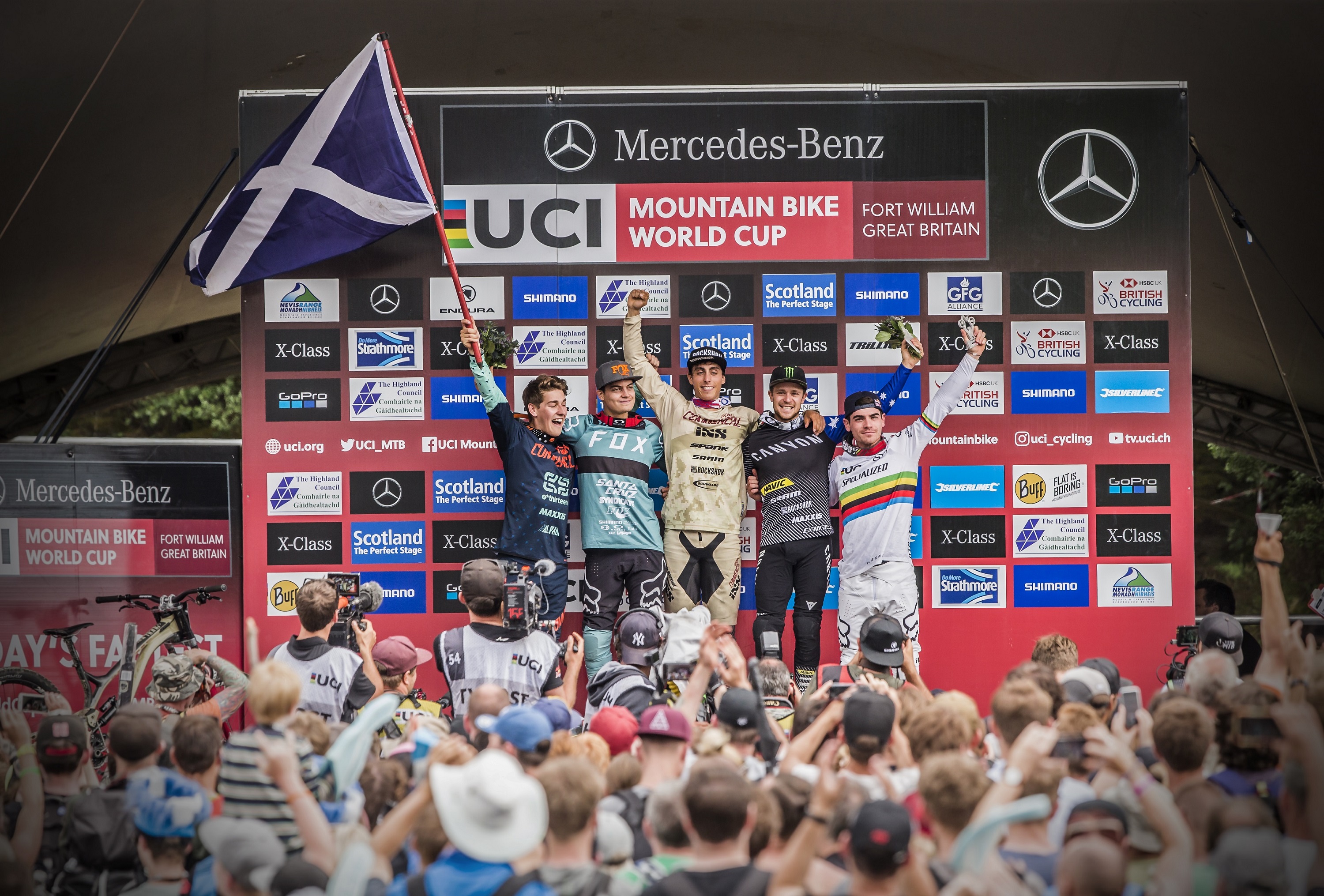 The thrills and spills of 4X

Away from the Downhill course, spectators can also enjoy the breath-taking aerobatic and racing skills of the 4X riders. This format brings the key features of downhill mountain biking into a short, head-to-head race that is gladiatorial in character and incredibly exciting to watch. Four riders start together and battle down a custom-built course of berms, jumps, step-ups and other testing features. The two fastest proceed to the next round, knock-out style, until the ultimate winner is crowned.

In 2002, Fort William held the very first UCI 4X World Cup. Sixteen years later and the course has been doubled in length to create one of the most exciting and atmospheric cycling arenas on the circuit.

The British 4X challenge in the men’s racing is led by Scott Beaumont and Luke Cryer, ranked 4th and 5th respectively in the 2017 Pro Tour series, and Natasha Bradley, who is ranked 1st in the women’s series.

Scotland gets on its bike

The UCI Mountain Bike World Cup is just the first in a series of high-profile cycling events which will turn the global spotlight on Scotland. Mind you, that’s only right when you consider that it was Scottish inventors and engineers who gave birth to the modern bike; with Dumfriesshire-born blacksmith Kirkpatrick Macmillan (1812-1878) inventing the rear-wheel-driven bicycle, and Ayrshire-born vet John Boyd Dunlop (1840-1921) pioneering the use of pneumatic tyres.

In September, some of the world’s best road racers will descend on Glasgow for the Grand Depart of this year’s OVO Energy Tour of Britain. Setting off from the city’s George Square, the teams will race south, to finish in Dumfries and Galloway. This year’s race will begin on a Saturday for the first time since 2010, allowing the Glasgow Grand Depart to form part of an exciting weekend of cycling as the 20th anniversary edition of the Pedal for Scotland charity event departs from the city on the Sunday morning. 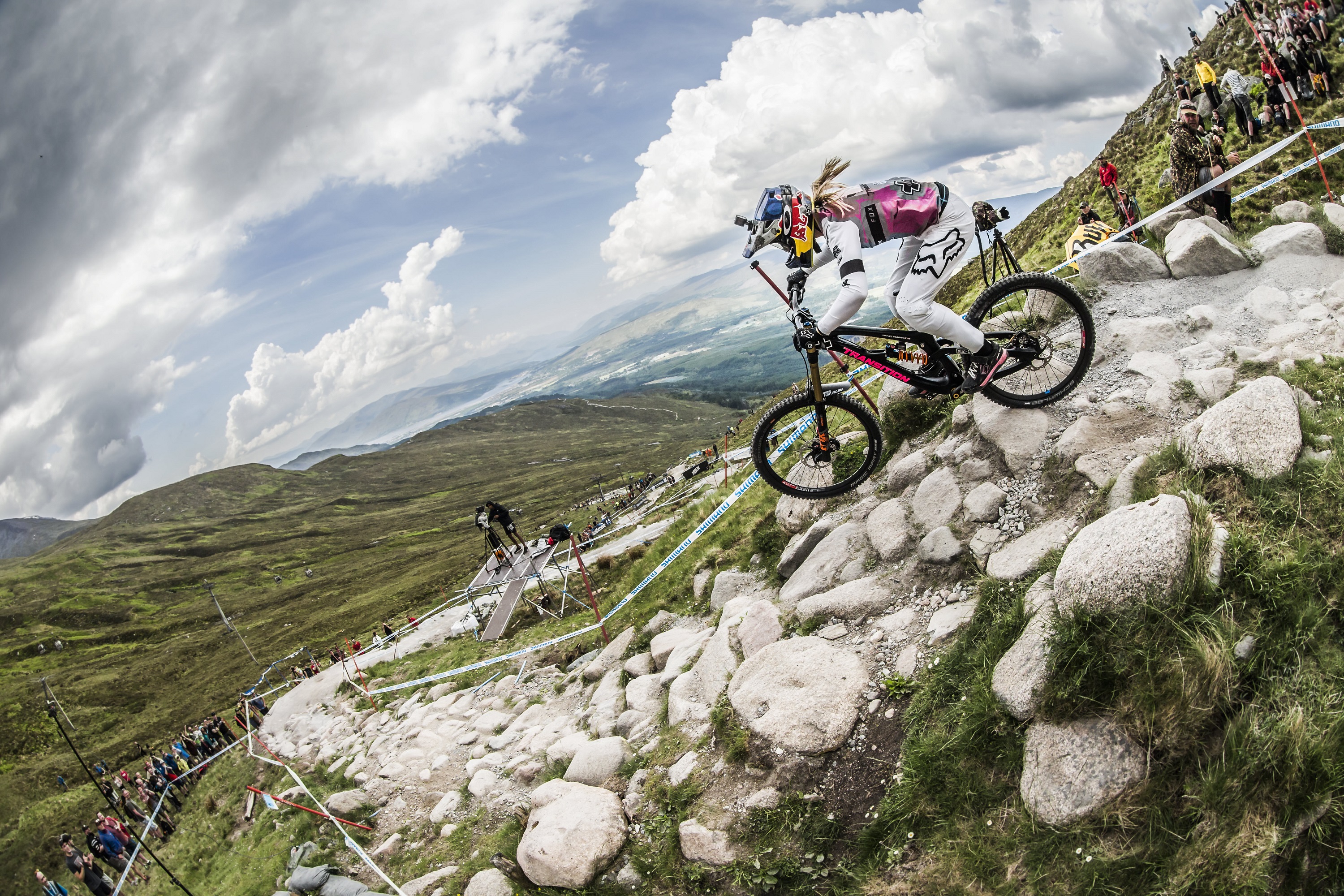 Roads and routes for all

“The OVO Energy Tour of Britain is part of an exciting calendar of cycling events, taking place across Scotland this summer. With more than 2,000 miles of the National Cycle Network covering the country, the event provides the perfect stage to showcase this to an international audience of cycling enthusiasts”.

From trails to the track

The city’s Sir Chris Hoy Velodrome – named in honour of Scotland’s of Scotland’s greatest-ever Olympian – will host the second round of the series from Friday 8–Sunday 10 November, with the event representing a crucial chance for nations to register qualifying points ahead of Tokyo 2020.

The event will also act as a dry run for 2023, when Scotland will host the inaugural UCI World Cycling Championships.

“Scotland has consistently proved itself to be a fantastic host for some of cycling’s biggest events in recent years. The newly-formed Women’s Tour of Scotland, the forthcoming UCI Track Cycling World Cup in Glasgow and, of course, the 2023 World Championships all demonstrate the standing within which Scotland is held in the cycling world”.