Scotland is a part of the United Kingdom (UK) and occupies the northern third of Great Britain. Scotland’s mainland shares a border with England to the south. It is home to almost 800 small islands, including the northern isles of Shetland and Orkney, the Hebrides, Arran and Skye.

Scotland on the map

Located in the mid-west of Europe, Scotland may be small but we have plenty to shout about! Occupying the northern third of Great Britain we share a border with England in the south and pack some of the most stunning scenery in all of the UK into our borders. From wild coastlines and pristine beaches to rolling valleys and towering mountains, Scotland’s geography is a huge part of its appeal. If that's not enough, we are strategically placed near the best of Europe and beyond, making us the perfect destination for work and play. 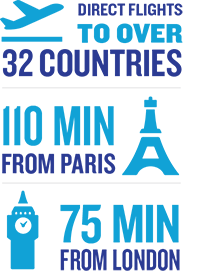 As well as a mainland jam-packed with things to see and do, Scotland is also home to almost 800 small islands. In the north of the country you'll find the majestic Shetland Isles and Orkney Isles, both steeped in a magical mix of Scottish, Celtic and Norse history and culture.

In the west you'll find incredible archipelagos such as the Outer Hebrides, home to incredible pristine beaches that are regularly mistaken for Caribbean islands in photographs, and the Inner Hebrides, site of one of the jewels in the crown of Scottish scenery, the Isle of Skye.

Scotland is surrounded by a number of bodies of water depending on the coast, with the North Sea in the east separating us from Europe's Scandinavian states, and the Atlantic Ocean in the north and west separating us from Iceland, the USA and Canada. To the south-west you will find the Irish Sea, which separates us from our Irish neighbours.

When you look at a map of Scotland, you may think we're small, but we pack an amazing variety of things into our borders. From our vibrant, bustling cities to the rolling hills and sparkling lochs of our jaw-dropping scenic landscapes, there's plenty of treasures to discover. Each region also has its own unique and distinct character - ensuring you're given a different experience in each and every place