The turbine generated more electricity in its first year than the entire of Scotland's wave and tidal energy sector in the 12 years before. 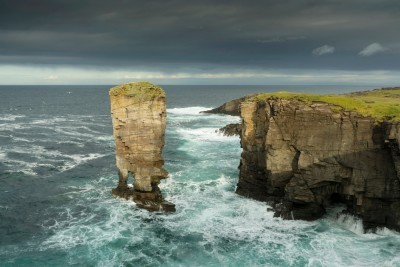 In 2017, the SR2000 tidal turbine was installed in the Fall of Warness tidal races, just off Orkney, heralding a change in the way the world looked at tidal energy.

With nearly 63% of the UK’s seas located along Scotland’s coastlines, it is of little surprise that Scotland is at the forefront of tidal energy developments, In fact, it’s estimated that we have up to 25% of Europe’s tidal resource, and 10% of the wave resource located here.

"Scotland is pioneering wave and tidal technologies, with more test and demonstration devices deployed here than in any other country."

The revolutionary 2017 SR2000 turbine, developed by Orbital Marine Power (formerly Scotrenewables), turned previous designs on their head, with its turbine blades suspended beneath a floating platform instead of being fitted to the sea bed, dramatically cutting installation costs, as well as making ongoing maintenance much easier.

In addition to being a more cost effective design to install and maintain, it also proved far superior at harnessing tidal energy – with the energy generated in one year from this single turbine equating to more than the entire wave and tidal energy sector output in Scotland in the 12 years preceding its launch.

It had been tested at The European Marine Energy Centre (EMEC) , a tidal and wave energy test centre in Orkney where more than 30 different devices have been tested since it was established in 2003. However, the 64m long SR2000 proved to be the most successful of them all, regularly generating the equivalent of 7% of Orkney's electricity demand, it at times powered up to 25%.

In 2021 an incredible new tidal turbine took over the spot of the Orbital Marine Power SR2000 turbine at Fall of Warness tidal races. Recognised as the world’s most powerful tidal turbine, the O2  is a two mega-watt (MW) offshore energy unit, now generating electricity via the grid in Orkney. Set to operate for the next 15 years, not only will this incredible turbine meet the energy demands of around 4,000 UK homes, is will also provide power to an onshore electrolyser to generate green hydrogen energy.

This amazing milestone for the tidal energy industry really demonstrates the potential of this fast-growing renewables sector. Scotland’s remarkable marine energy resource has placed us front and centre in developing the global standard for tidal energy.

Rediscover Orkney and The Outer Hebrides