Thomas Douglas: From Highland Clearances to the Red River Colony

Thomas Douglas took the concept of giving, especially to those less fortunate, to impressive lengths. An incredible philanthropist, Douglas spent most of his life helping displaced Scots find a new home in Canada.

December is the perfect time of year for thinking about family, friends and loved ones. Many people usually spend the month attending various gatherings wrapped up in the spirit of togetherness. Much as we love the presents too, this time of year has always been more about giving than receiving. It’s this selfless spirit that leads us to look at the life of Thomas Douglas, 5th Earl of Selkirk. This December we’re profiling the extremely selfless work he did, specifically looking at his unwavering commitment to establishing the famous Red River Colony.

Douglas, the youngest of seven children, was born in the south of Scotland in June of 1771. Having so many older siblings, he was understandably not expected to inherit the family estate. Instead, Douglas enrolled at The University of Edinburgh, studying law in the hopes of supporting himself. During his studies he became aware of the work of William Wilberforce, a leading force in the movement to end slavery. Douglas became deeply influenced by this humanitarian work and vowed to imitate it in a cause close to his own heart.

In the aftermath of the Jacobite rebellion in Scotland, Douglas became acutely conscious of the troubles of Scottish crofters. The farm workers were being forcibly removed from their homes by their landlords. This practice was widespread across the Highlands of Scotland, becoming known as the Highland Clearances. During the Clearances, the aristocratic landowners ruthlessly evicted hundreds of thousands of tenants in favour of raising sheep, which was far more profitable.

Douglas was desperate to assist his fellow countrymen and spent a great deal of time investigating different ways he could help them find new homes. After exploring several options, he eventually realised that Canada presented an excellent opportunity for a new beginning! Douglas saw Canada as the only viable option to improving the fortunes and livelihood of the Scottish crofters.

Having outlived all six of his siblings, Thomas Douglas became the 5th Earl of Selkirk in 1799, inheriting the title he never thought he’d receive. He almost immediately set about using his new found money and influence to make meaningful strides in his desire to help the displaced Scots. He began by purchasing portions of land in Canada and creating settlements for the Scottish crofters.

First up for Douglas was a small settlement on Prince Edward Island in 1803, which proved an immediate success. Douglas built upon the success of this first attempt, creating another settlement in Upper Canada in 1804. During this period Douglas travelled extensively across North America and his philanthropic work earned him a degree of fame on both sides of the Atlantic. However, despite these early successes, Douglas was still convinced that there was more he could do, and on a much larger scale.

Back home in the UK, Douglas planned to use this new found fame to his advantage. He petitioned the government for a land grant in a fertile region known as the Red River Valley. Douglas had long admired the benefits of the region, having read the works of fellow Scot, Alexander MacKenzie. MacKenzie was an explorer and was the first man to cross Canada to reach the Pacific. Having read his description of the Red River Valley, Douglas saw it as the perfect spot to place a new, much larger colony.

Unfortunately, his request was rejected, as the land had already been granted to the Hudson’s Bay Company (HBC). HBC were using the land as part of their lucrative fur trading business and refused to part with it. Undeterred, Douglas began buying large amounts of shares in HBC to gain a position of power. This new power, alongside family relations within the company, meant Douglas was able to secure the land in an agreement that would see it serve as an agricultural settlement for the company. 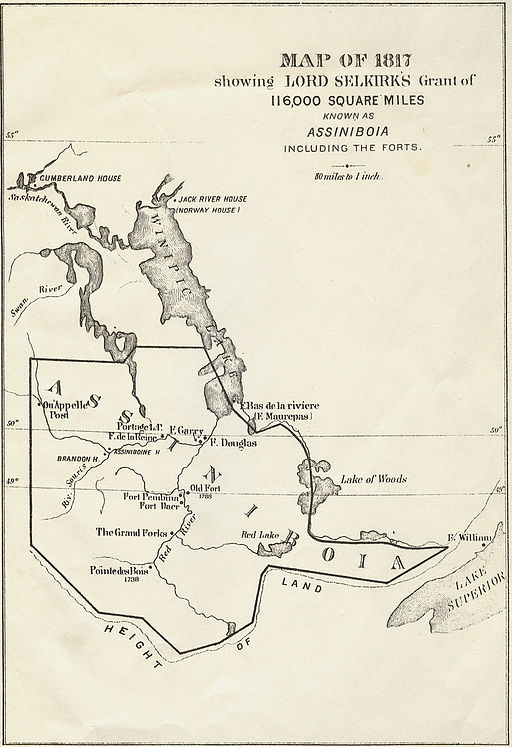 The move became known as ‘The Selkirk Concession’ and provided Douglas with a massive 300,000 square kilometres of land, an area roughly four times the size of Scotland! As part of the concession, Douglas agreed to provide produce such as flour, beef, pork and butter to the HBC. This was all easy to provide thanks to the fertile land and crofting expertise of the Scottish migrants.

His plan, however, was not without its teething problems and was met with hostility almost from the outset. Douglas had deliberately picked an area of land that would restrict the flow of furs to HBC’s biggest rival, the North West Company (NWC). The local indigenous people, the Metis, had long-standing ties with the NWC and refused to accept this new control over the area, leading to strained relations.

The first colonisation attempt was made in 1812, consisting of just under 200 people. Although initially relying on the Metis over that winter, relations between the two groups were always somewhat hostile. By 1816, the tension had reached fever pitch between the Metis and the settlers, resulting in the bloody Battle of Seven Oaks.

In the aftermath of the battle, Douglas arrived in Canada to personally supervise the re-settlement of the area. Armed with a group of disbanded Swiss soldiers, Douglas controversially stormed nearby Fort William in response to the Battle of Seven Oaks. The move would continue to plague Douglas, as he spent most of the rest of his life defending his actions in court.

Between 1817 and his death in 1820, Douglas committed almost all of his time, and considerable wealth to ensuring his colony could survive and prosper. His determination was not only crucial in the formation of the town of Winnipeg but also set the foundation for the state of Manitoba.

Modern boundaries mean that much of the Red River Valley that Douglas secured now actually forms part of the United States of America. Northern Minnesota and eastern North Dakota both now fall within this old territory. However, Douglas is remembered across Canada for his efforts with the Red River Colony. A plaque was also erected in Winnipeg to commemorate his role in Manitoba’s history.