What is it about Robert Burns? Not even Shakespeare is remembered so personally with an annual birthday celebration.

What is it about Robert Burns? Not even Shakespeare is remembered so personally with an annual birthday celebration. It's in the spirit of the lasting inspiration of Scotland's National Poet that we invite you to celebrate Burns Night.

We've outlined the elements of a traditional Burns Supper below, but invite you to consider giving it a modern twist by incorporating a contemporary menu or playing modern interpretations of Burns songs. Whisky, of course, is a mandatory part of any Burns Supper and eminent whisky writer Charlie MacLean has given recommendations to accompany both the traditional and the nouvelle suppers.

He spoke from the heart to the heart. He makes you laugh, he makes you cry. Note the change to the present tense. For that's the point. There's something immortal about Burns: his words, his melodies, his humanity, his spirit.

Scottish artist Steven Campbell sees parallels between Burns and contemporary rock superstars like Bob Dylan and Bruce Springsteen and at an exhibition at the Scottish National Portrait Gallery in 2000, Campbell portrayed Burns wearing Armani suits and looking very hip. His thinking was partly to help younger audiences see the relevance of Burns today.

Burns has always been close to the hearts of many and many a household around the world has a well-thumbed leather bound volume of his poetry passed down from generation to generation. But recently there has been a resurgence of creative interest with contemporary singers like Dougie MacLean and Eddi Reader doing emotionally powerful cover versions of songs like Ae Fond Kiss and Green Grow the Rashes O. And last year saw the inauguration of Scotland's newest and most exciting Burns festival with a Gala concert at Culzean Castle in Ayrshire with the Royal Scottish National Orchestra and guest soloists Eddi Reader, Karen Mathieson and Jean Redpath. The first Robert Burns Humanitarian Award was also presented at the festival to Sir John Sulston for his work with the Human Genome Project.

Robert Burns was born in Alloway in the parish of Ayr in the south west of Scotland on 25th January 1759.

His birth is traditionally celebrated around the world with a Burns Night Supper on, or as near as possible, to the 25th January. It's an event quite unlike any other in its full form comprising pipes, prayers, poetry, songs, speeches and the ritual slicing of a steaming haggis. And sometimes kilts are worn too.

Here is the usual running order of a Burns Supper with brief explanatory notes:

Once all the guests are gathered the supper usually starts with the host reciting Burns Selkirk Grace.

The first course is then served: traditionally Cullen Skink or Cock-a-Leekie soup.

When the first course is finished and cleared away, the main course, the haggis is ceremoniously brought to the table preceded by a piper playing Brose and Butter or some other light Scots tune. The haggis on its groaning trencher is laid before the host. 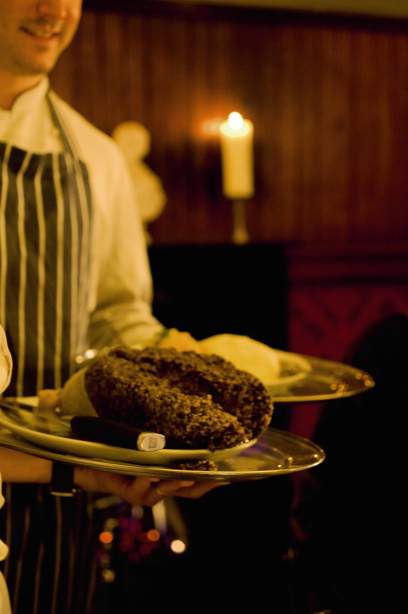 Address to a Haggis - a previously designated guest (ideally one possessing verve) then recites Burns' famous poem at the haggis. This humorous, earthy poem is, of course, the raison d'etre for the haggis taking pride of place on the menu.

The poem ends with the reader enthusiastically slicing open the haggis with a knife (or, if in possession of one, a ceremonial dirk).

The main course is then served, traditionally with neeps and tatties (turnips/swede and mashed potatoes) and accompanied by wine, beer or whisky.

Before the speeches, and whilst the meal is being cleared away, is a good opportunity to have a rendition of a Burns song or two.

The Immortal Memory address, given either by the host, an invited speaker or a learned guest, is the serious part of the evening. The address should be a speech addressing some aspect of Burns' life, work or lasting influence. It can be academic or personal but it should aspire to touch the hearts and minds of the gathering.

It's traditional at this point for a male guest (one of the laddies) to deliver a light-hearted, teasing toast to the lassies which usually involves a tongue-in-cheek list of the shortcomings of the fairer sex. The men should be wary, however, as a spokeswoman for the lassies then gets the opportunity to reply with (an equally tongue-in-cheek) list of the shortcomings of the baser sex!

To round off the speeches its customary for a guest with a gift for storytelling and a good memory to recite one of Burns' great narrative poems, Tam O' Shanter or Holy Willies Prayer. The first is an atmospheric account of a drunken man's encounter with some witches (imagined or otherwise) and the second is the overheard highly amusing (decidedly unchristian) prayer of a bad loser and none-too-blameless church elder.

The evening traditionally finishes with a ceilidh Scottish Country Dancing, songs and poems (Burns or otherwise). When it's time to go, everyone gathers in a circle, holds hands and sings Burns' immortal hymn to friendship Auld Lang Syne (first and last verses with two choruses).

When he was with his chums in one of the many taverns he frequented, Robert Burns drank ale. Deuchars India Pale Ale, from the Caledonian Brewery Edinburgh (recently named Best Beer in Britain) perfectly fits the bill. And indeed the brewery has just brought out an amber coloured malty beer called Burns Ale.

If the bard was drinking with gentry, he drank claret and rum. So feel free to offer these drinks as well.

Plenty of water water on the table; and water in the whisky. Tap water's fine, so long as it's not heavily chlorinated. You and your guests will feel far better next day if you had a session on mixed spirits and wines, I promise you!

Choose whiskies which complement the character and flavour of the dish - light flavours with light whiskies, strong flavours with heavier whiskies.

Whisky goes surprisingly well with food - it combines and contrasts well. If properly selected and you can have a lot of fun talking about just how well (or otherwise) it complements the dish.

Serve blended whisky as an aperitif, or Royal Salute 21 YO if you are pushing the boat out, for a session with ice and water or just with water. Famous Grouse, or Cutty Sark if you want to surprise your guests and mix with ginger ale, soda or Coke (that's how they drink it in Southern Europe). Or what about a whisky sour, with lemon-juice and a dash of soda or fizzy water deliciously appetising for this, use any Scotch you like.

This is a man's menu; a red-wine menu. Great opportunity for the big malts:

The Bard of Love

Burns wrote some of the greatest love songs ever. He also wrote stirring songs about friendship and humanity and haunting songs evoking life in the country. In all he wrote 368 songs and Linn Records have recently produced a 12 volume set featuring them all.

Dougie MacLean (the bard of Dunkeld) often sings Burns' songs at his concerts. In 1995 he recorded an album Tribute that included half a dozen of his Burns' cover versions including A Mans A Man for A That, Banks and Braes and Ca The Yowes. A version of Ae Fond Kiss is on the album and Green Grow the Rashes on the live album She Will Find Me.

Eddi Reader sang a number of Burns' cover versions when she was with Fairground Attraction but now as a solo artist she is finding Burns to be an increasingly inspiring muse. She feels that in Burns there is still an unmined vein of emotional gold.