Everyone has heard it – the speculation and jokes about what Scots wear under their kilts. I was no different. When I finally decided to visit Scotland, it was the first thing that came to mind.

Written by Barbara Weibel, publisher of Hole in the Donut Cultural Travel

Everyone has heard it - the speculation and jokes about what Scots wear under their kilts. I was no different. When I finally decided to visit Scotland, it was the first thing that came to mind. But I assumed, as I suspect many do, that kilt-wearing men were more of a stereotype that a reality. Imagine my surprise the first morning, when I walked down the Royal Mile to Edinburgh Castle, where briefcase-toting men were casually walking to work, outfitted in full kilt regalia.

Any discussion about the history of the kilt is rife with disagreement. Early Irish stone carvings depicting men in knee-length garb have led to speculation that kilts were developed in Ireland and later imported by Scots. English lore insists that Thomas Rawlinson, who owned an iron smelter in the Scottish Highlands early in the 18th century, modified the clothing of his workers because their belted plaids were too hot for use in his factory. He purportedly cut their tunic-like garments in half and added a belt, which became the kilt as we know it today. Today, both theories have been largely debunked by historians. Irish carvings show men in tunics, rather than in traditional two-piece kilts, and the English myth is easily disproved because, beginning in the early 1600's, literature sources state that wearing of the "belted plaid" was nearly universal among all Gaelic Highlanders. 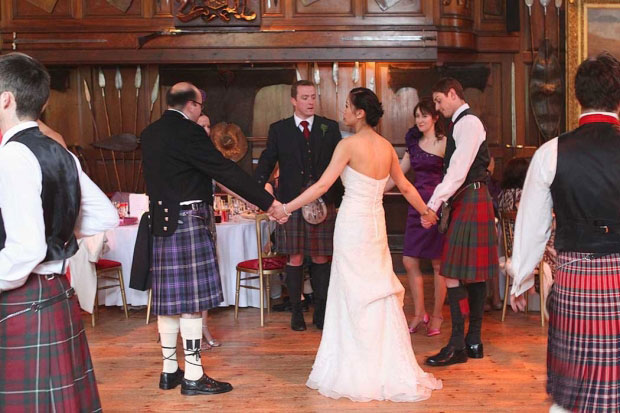 Though I quickly became accustomed to seeing men in kilts on the streets of Edinburgh, it wasn't until I was invited to a Scottish wedding at Blair Castle that I realised just how fashionable kilts have become. With one or two exceptions, every male guest at the wedding sported a kilt. Fascinated, I made the rounds of the castle's great hall, noting that no two were alike. Each featured a woolen knee-length garment that was pleated in the back; wrapped around to the front; fastened with belts, buckles, and finished with a pin on the free edge. A sporran (Gaelic pouch) hung from a chain or belt on top of the front of each kilt and long woolen socks, turned down just below the knee, were often garnished with a sheathed knife (Sgian dhu), belted to the calf just above the ankle. Finally, each kilt was topped with shirt and jacket of the wearer's choice.

Despite similarities, the variety among kilts was astounding. Sporrans ranged from simple leather pouches to large purses embellished with fur or sealskin. Stockings were decorated with tassels and, in some instances, held up with garters. Tartans ranged from the well-known green/red/navy plaid to combinations with orange, tan, grey, and maroon. I even saw a couple that sported baby blue and pink plaids!

When my new friends explained that every clan has a particular tartan that has been handed down over the generations, I realised that, with Scottish ancestry on my mother's MacDonald side, I too should have a clan tartan. On the trip back to Edinburgh, my host family obliged my wish to buy a scarf in my tartan, stopping at numerous shops along the way. Unfortunately, we were traveling through Campbell territory. The great feud between the Campbells and MacDonalds may be ancient history, but asking for a MacDonald tartan in Campbell country raised more than one eyebrow. I may not have found a MacDonald tartan scarf, but I departed with something even more precious: memories of a warm and welcoming country, where men wear kilts with pride and flair.

A short note about the author:

When Barbara Weibel realised she felt like the proverbial 'hole in the donut', solid on the outside but empty on the inside, she walked away from corporate life and set out to see the world. Read first-hand accounts of the places she visits and the people she meets at Hole in the Donut Cultural Travels. Follow her on Facebook or Twitter.

Weaving and working for sustainable textiles