Shah Rukh Khan, who has appeared in over 80 Bollywood films, was in Edinburgh to be awarded with the title Doctor Honoris Causa from the University of Edinburgh Chancellor HRH The Princess Royal. The actor also held a lecture at the University's New College.

The actor, who has received 14 Filmfare Awards, (the Indian Oscars) and has over 15 million Twitter followers, gave a public lecture on Life Lessons to around 1000 people. Watch the full lecture here. 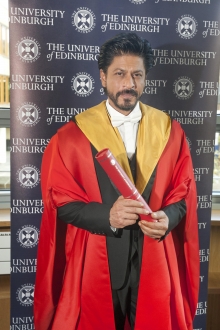 Journalists and broadcasters were also invited along to meet Mr Khan who was awarded one of India's highest civilian awards, the Padma Shri back in 2005.

The University of Edinburgh has been linked with India for nearly 250 years after Professor William Robertson, the University's Principle from 1762 to 1793, wrote one of the earliest European texts to focus on India.

To mark the star's appearance, the university also screened one of his most popular films "Kuch Kuch Hota Hai" this week, the first Bollywood blockbuster to be shot in Scotland.

Watch this short clip from the film and see if you can spot the Scottish locations: