Image: A tope caught for tagging. The tags provide valuable information on where the animal moves to. The tope grows up to 2 m long and can be found in large packs within Scottish waters.

It is a warm, sunny day, the seas are calm. Off a white sandy beach, a small boat at anchor gently bobs on the surface. Below, swarming over a reef, are hundreds of sharks, about 1.5 m long. They are feeding on fish and other reef creatures and will remain there for a few days before moving on as part of a long migration route that will take them from one end of the country to the other. Where are we? Whilst the scene above sounds reserved for far flung destinations like Australia or Africa, it is in fact a natural event in Scottish waters, where the part of this story that is perhaps a little make-believe is the weather!

One of the main ways sharks and their relatives (skates and rays), collectively known as elasmobranchs, differ from fish is their skeleton. Instead of bones, their skeletons are formed from cartilage which is lighter and more flexible.

The shark in our story is the tope, a native shark that grows up to 2 m in length. It can be likened to the reef sharks commonly seen in warmer waters. The tope is not the only elasmobranch (the collective term for sharks, skates and rays) species we have in Scotland. Over 60 species of shark, skates and rays have been recorded in our waters. Whilst some of these are undoubtedly one off’s, others are regular visitors or residents.

Among these are some gentle giants!! Basking sharks, the second largest fish on the planet; at up to 11 m in length, swim through the water filtering out plankton. The largest skate species in the world; the common or flapper skate at 3 m length and 2 m wide has found a stronghold in Scottish waters. 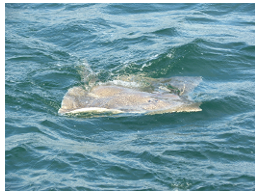 There are also many smaller species, such as the lesser spotted cat shark and thornback ray (more commonly called dogfish and thornies).

But regardless of size, what they all have in common is that a lot of people simply don’t know they are swimming in Scottish waters. It is important to point out here, that despite the richness of shark, skate and ray species in our waters, they do not pose any threat to members of the public and their presence should be cause to celebrate, not fear.

Another set of stats related to sharks skates and rays worldwide, but sadly also relevant in Scottish waters are also attention grabbing, but for a very different reason. Their decline. For example, the common skate, as the name may suggest, was once prevalent in UK waters. However, it is the first documented case of a marine species being declared locally extinct, being removed from much of its former range and pushed back to a few, localised strongholds. The spurdog, or spiny dogfish, is another Scottish shark. Over the last 100 years this species is estimated as having decreased by as much as 80%. These figures are reflective of the high susceptibility of elasmobranchs to fishing and highlights the importance of suitable management for the remaining populations.

Image: A young spurdog just about to be returned. The spurdog gets its names from spikes just in front of each fin on its back (the dorsal fins).

Elasmobranchs are slow growing and late to mature (females of some species don’t mate until they are around 14-15 years old), they have long gestation periods (the spurdog holds the record for the longest incubation of young of any vertebrate at 24 months) and they produce only a few young. This means that populations can be slow to recover if numbers were to decrease.

Scotland has one last amazing fact up its sleeve and this is, for me and many other researchers and conservationists, the most impressive. At the time of writing, we have the only Marine Protected Area in the UK (The Loch Sunart to the Sound of Jura Marine Protected Area) that is designated to protect an elasmobranch species – the common skate!!! And another is proposed in the Hebrides for basking sharks.  Scotland’s coastal waters are being increasingly shown to be very important to many shark, skate and ray species and we are only just beginning to understand this relationship.

Head back to our bobbing boat....to add to this story, there is now a team of researchers on board, eager to learn more about our native elasmobranch species. They are deploying tags which can track their movements. 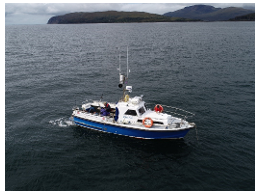 The types of tags vary depending on what you need to find out. We can use simple ID tags; these tags are used to mark a captured shark or skate with an ID number before it is returned. If the animal is recaptured, we can see the straight-line movement, from one point (capture) to another (recapture). If we want to learn more about the movements of the animal between these points, we need to use more sophisticated tags. There are, broadly speaking, two main types of tags we use:

From these tags we can see how these sharks, skates and rays are using our waters and some of them connect our local waters to the rest of the North Atlantic! We are fortunate in Scotland that we have a strong research community taking an interest in these animals. Find out more!

See some of the research taking place on one of our native skates, the flapper skate here.

Image: A large flapper skate being fitted with tags to track its movements, helping to aid in its conservation. The flapper skate is the largest skate species in Europe!

It isn’t just scientists though, sea angling is a large contributor to the Scottish economy but as well as their money, many also give their time towards conservation. The vast majority of all sharks, skates and rays caught recreationally are returned alive, and some of the anglers tag the animals they release, contributing to highly successful tagging programmes. This data has been paramount to management efforts; the skate MPA was proposed by the Scottish Sea Angling Conservation Network who presented data that many anglers had been collecting since the 1970’s to show that the area was a stronghold for skate where they spent a lot of time. Such efforts for conservation are highly commendable and a great example of everyone working together to make a difference!

We are so lucky in Scotland to have such amazing and diverse shark, skate and ray life in our waters. This is something we all should cherish and celebrate as they add so much to our local seas whilst being largely unseen. With this celebration, we have an obligation to learn enough about them to ensure they are managed well, allowing future generations to sit on that boat, come rain or shine, and enjoy our incredible marine life as we do today.  Please help in this by spreading the word about the incredible world of Scottish Sharks.

With thanks to Dr. James Thorburn and everyone at University of St. Andrews.